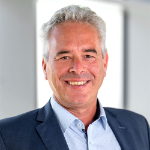 The research group cyber-physical systems analyzes and develops technologies to implement complex autonomous machinery. In this scenario a subsystem’s physical components are not only monitored and controlled, they also communicate with other subsystems to continuously levarage the advantages of contextual information.

The evaluation of data transmitted and collected by IT is an important part of our scope. In this respect we base our work on the efforts made by other research groups within iisys.

Current projects within the group show that the topic entails various aspects to be considered. The following example points out our understanding of cyber-physical systems: Consider a closed-loop rotational speed control of an electric motor. The controller determines the amount of power to be delivered to the motor based on the measured number of revolutions. In addition to standard mathematical models modern controllers also use heuristics, by which we mean a software representation of knowledge on process specific interferences. This also enables them to seamlessly switch between different modes of operation as required by the process.
Such a ‘classical’ embedded system becomes a cyber-physical system when it is linked to other components in a network. The integrated system can derive maintenance requirements from the power trend of the average power consumption reported by the motor controller (condition monitoring).

In an optimal scenario such a system can access data from a multitude of controllers and correlate it with other properties such as alerts or service records. Based on a large data base, the cyber-physical system can hence predict future performance or provide immediate recommendations for efficient operation of single control circuits.